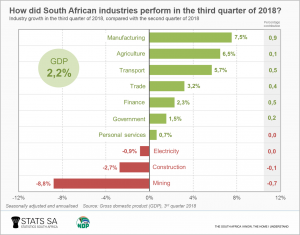 Good news to end 2018 as the South African economy grew by 2,2% quarter-on- in the third quarter of 2018, bringing to an end the country’s second recession since 1994. Higher contributions to growth in a number of industries – most notably in manufacturing, transport as well as finance and business services – were enough to lift economic growth back into positive territory.

The rise in economic activity in the third quarter follows two consecutive quarters of negative growth, which is a widely recognised indicator of recession. The economy slumped by 2,6% in the first quarter of 2018 and a further 0,4% in the second quarter.

This bodes well for the new year and we look forward to a more positive outlook.

The Minister of Finance tabled the Carbon Tax Bill in Parliament on 20 November 2018, giving effect to the announcements made in the 2017 and 2018 Budget and by the Minister in his MTBPS speech in October. In tabling the bill, the Minister stated that “climate change poses the greatest threat facing humankind, and South Africa intends to play its role in the world as part of the global effort to reduce greenhouse gas emissions”. The Carbon Tax Bill, and related measures, will enable South Africa to meet its targets as agreed in the Paris Agreement.

received during the Parliamentary hearings convened by the Standing Committee of Finance earlier this year, following publication of the draft Bill in December 2017. Cabinet adopted the Carbon Tax Bill in August 2017, noting the bill as an integral part of the system for implementing government policy on climate change.

The Carbon Tax Bill gives effect to the polluter pays principle and aims to price greenhouse gas emissions by obliging the polluter to internalise the external costs of emitting carbon and contribute towards addressing the harm caused by such pollution.

As announced in the 2018 MTBPS, the carbon tax will become effective from 1 June 2019. A review of the impact of the tax will be conducted after at least three years of implementation of the tax and will take into account the progress made to reduce GHG emissions, in line with our NDC Commitments. Future changes to rates and tax-free thresholds in the Carbon Tax will follow after the review and will be subject to the normal transparent and consultative processes for all tax legislation, after any appropriate Budget announcements by the Minister of Finance.

We will review the carbon tax bill and advise on implications prior to implementation in 2019.

No Poverty – Sustainable Development Goal No.1

The Sustainable Development Goals are the blueprint to achieve a better and more sustainable future for all. They address the global challenges we face, including those related to poverty, inequality, climate, environmental degradation, prosperity, and peace and justice.

While global poverty rates have been cut by more than half since 2000, one in ten people in developing regions are still living with their families on less than the international poverty line of US$1.90 a day, and there are millions more who make little more than this daily amount. Significant progress has been made in many countries within Eastern and South-eastern Asia, but up to 42% of the population in Sub-Saharan Africa continues to live below the poverty line.

Poverty is more than the lack of income and resources to ensure a sustainable livelihood. Its manifestations include hunger and malnutrition, limited access to education and other basic services, social discrimination and exclusion as well as the lack of participation in decision-making.

Economic growth must be inclusive to provide sustainable jobs and promote equality. Social protection systems need to be implemented to help alleviate the suffering of disaster-prone countries and provide support in the face of great economic risks. These systems will help strengthen responses by afflicted populations to unexpected economic losses during disasters and will eventually help to end extreme poverty in the most impoverished areas.

In South Africa we need to ensure that we achieve these goals so that our entire society is uplifted and benefit from future economic growth.

Please ensure you make not of these key dates over the holiday period to ensure compliance.

Please feel free to contact us for professional assistance in this regard.