Any of the five partners can be contacted regarding your specific tax requirements. In addition we have tax consultants and tax compliance officers specifically equipped to deal with tax matters.

The sustainability of the public finances will depend heavily on government’s ability to reduce growth in the public-service wage bill. Compensation accounted for about 34 per cent of consolidated spending in 2019/20. Between 2006/07 and 2019/20, compensation was one of the fastest-growing spending items, increasing faster than GDP growth. As outlined in previous editions of the Budget Review and MTBPS, by 2019/20 rising compensation spending had become unaffordable and was the main expenditure risk to the sustainability of the public finances. 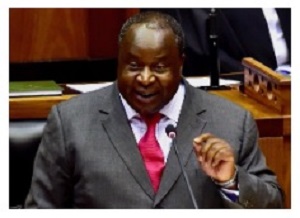 At the general government level (which includes municipalities), South Africa’s wage bill as a share of output is approximately 5 percentage points higher than the Organisation for Economic Co-operation and Development average – and on par with Iceland and Denmark.

The 2020 Budget proposed compensation reductions totalling R160.2 billion for 2020/21 to 2022/23, relative to the pre-Budget baseline. The 2020 MTBPS proposed further downward adjustments to compensation, amounting to R143.2 billion for 2021/22 to 2023/24. Including COVID-19 adjustments, compensation at the consolidated budget level is projected to grow by 2.1 per cent in the current year and 1.2 per cent per year over the medium term. These growth rates can be achieved through, for example, doing away with the annual cost-of-living adjustment in the public service up until 2023/24, together with measures to reduce headcounts – a combination of early retirement and natural attrition, as well as the freezing or abolishing of non-critical posts. In addition, government is exploring measures such as harmonising allowances and benefits, reconsidering pay progression rules and reviewing occupation-specific dispensations. Performance bonuses are already being phased out and careful consideration is being applied to amend or abolish some allowances and benefits. Wage negotiations will take place in the Public Service Co-ordinating Bargaining Council. Government will negotiate on the basis of fairness, equity and affordability. A pact that exceeds budgeted amounts would present a risk to the fiscal framework. For example, a three-year inflation linked agreement would raise the total shortfall to R112.9 billion by 2023/24. And an agreement similar to the one achieved in 2018 – 1 percentage point higher than inflation – would create a compensation shortfall of R132.7 billion (or 2.2 per cent of GDP) by 2023/24.

In late 2019/20, government did not implement public-service salary increases for 2020/21 – which would have added over R37 billion to the 2020/21 wage bill – and tried to renegotiate terms. No agreement had been reached, however, when a number of unions took government to court to compel implementation of the increase.

Government argued against this application on two main grounds:

Ultimately, the court accepted the argument that the original agreement was invalid and unlawful, and affirmed the National Treasury’s constitutional role in safeguarding the public finances. While government remains committed to collective bargaining and healthy labour relations, this decision helps to maintain an appropriate balance between government’s responsibilities as an employer and as a provider of basic services.

Personal income tax rate increases are often advocated when higher revenues are needed. Over the past six years, these taxes have been adjusted upwards five times to raise more revenue. Recent increases include the introduction of a new top rate of 45 per cent in 2017, and below-inflation adjustments in the brackets and rebates for a number of years. Further increases in personal income taxes would put additional pressure on households that have been negatively affected by the pandemic and undermine the chance of a stronger economic recovery. There is no compelling case for increasing these rates at this time. Instead government aims to reduce the rate over time by increasing the tax base through greater economic growth, employment and enforcement.

Below is a table reflecting Personal Income tax rates and bracket adjustments: 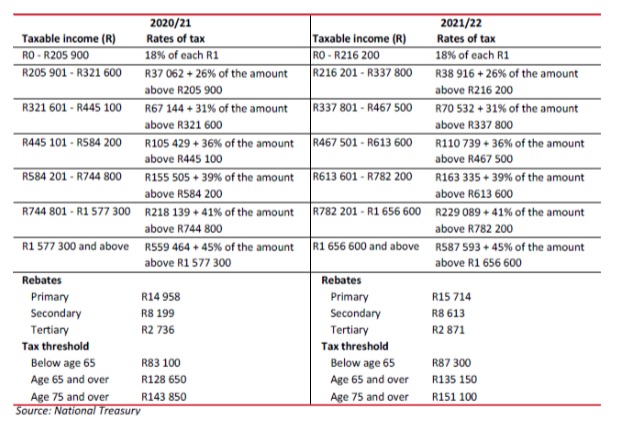 Government is reducing the number of tax incentives, expenditure deductions and assessed loss offsets, with the aim of lowering the corporate income tax rate over the medium term. These changes are expected to enhance efficiency, transparency and fairness in the business tax system, while facilitating economic growth through improved investment and competitiveness.

Although corporate income tax is paid by the business, the burden of this tax is ultimately borne by three parties – the owners of capital, labour (through wages) and consumers (through prices). By implication, reducing the rate can have a positive effect on wages and employment, while promoting additional investment. South Africa has a relatively high corporate tax rate in comparison with similar countries and trading partners. High tax rates reduce competitiveness and create an incentive for profit shifting to lower-tax jurisdictions.

Tax incentives are public subsidies to the private sector. They illustrate a persistent trade-off in tax policy: the narrower the tax base, the higher the tax rate required to raise a given level of revenue. For example, many African countries have corporate income tax rates similar to or higher than South Africa, but raise lower levels of revenue because their tax bases are often narrower due to generous incentives, exemptions and tax holidays. Tax incentives often undermine the principles of a good tax system, which should be simple, efficient, equitable and easy to administer.

Reducing the extent of tax incentives for individuals and companies will provide the fiscal room to lower the corporate tax rate, which is aimed at benefiting all businesses, employees and consumers. Tax incentives and some expenditure deductions provide favourable tax treatment to certain taxpayers or groups of taxpayers, and inevitably result in the creation of vested interests and lobby groups. The 2021 Budget proposes to either limit or let lapse those tax incentives that erode the equity of the tax system or do not meet their intended objectives.

The COVID-19 pandemic has had a severe impact on tax revenue collection. Given large predicted shortfalls in revenue for 2020/21 and over the next three years, the 2020 Medium Term Budget Policy Statement (MTBPS) confirmed that tax increases totalling R40 billion would be required over the next four years to help stabilise public debt and return the public finances to a sustainable position. These increases were first announced in the June 2020 special adjustments budget.

Gross tax revenue for 2020/21 is now expected to be 10.6 per cent lower than in the previous fiscal year and R213.2 billion lower than projected in the 2020 Budget due to the pandemic. However, as a result of the recovery in consumption and wages between October and December 2020, and a boost to corporate income tax receipts from the mining sector, 2020/21 revenue collections are expected to be R99.6 billion above the 2020 MTBPS estimate.

COVID-19 has led to many business closures and job losses. To support households, businesses and the economy in the context of relatively high income tax rates, government will not introduce measures to increase tax revenue in the 2021 Budget, and previously announced increases over the
next three years will be withdrawn.

The main tax proposals are:

Should you have any queries please do not hesitate to contact us in this regard.